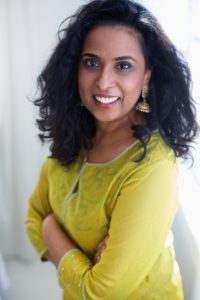 Short bio (the nitty, the gritty):

Sayantani DasGupta is the New York Times bestselling author of the critically acclaimed, Bengali folktale and string theory-inspired Kiranmala and the Kingdom Beyond books, the first of which—The Serpent’s Secret—was a Bank Street Best Book of the Year, a Booklist Best Middle Grade Novel of the 21st Century, and an EB White Read Aloud Honor Book. Sayantani is a pediatrician by training, but now teaches at Columbia University. When she’s not writing or reading, Sayantani spends time watching cooking shows with her trilingual children and protecting her black Labrador retriever Khushi from the many things that scare him, including plastic bags. She is a team member of We Need Diverse Books, and can be found online at sayantanidasgupta.com and on Twitter at @sayantani16.

Long bio (the nittier, the grittier):

The author Toni Morrison says, “If there’s a book that you want to read, but it hasn’t been written yet, then you must write it.”

When I was growing up in the 1970’s as an Indian immigrant daughter in Ohio, there was no book like The Serpent’s Secret. In fact, it usually felt like there was no space, no story, no cultural mirror anywhere that reflected my face and my body and my experience back to me. And, therefore, maybe my face and body and experience weren’t good enough, weren’t worthy, should take up the least amount of space possible, maybe shouldn’t be around at all.

A total bookworm and movie addict, I lost myself in stories. From the Betsy, Tacy books to Star Wars, my taste was wide. But even then, I ended up wishing for Meg Murry’s all-American family from A Wrinkle in Time or Jo March’s auburn hair from Little Women. There was always something missing, but it took me years to understand this as a problem with the lack of diversity in the stories I was reading and the movies I was seeing, and NOT a problem with myself.

But when I went on long summer vacations to my grandparents’ homes in Kolkata, India, that’s when I saw that other face of mine – that other part of me that completed me. That’s when I found myself in my own cultural stories. And if you’ve never experienced it, there’s something amazing about getting off one of those long 20+ hour plane rides, and feeling like you’ve travelled upside down through a wormhole into another universe. Being an immigrant kid returning to India in those days – before the internet, before my grandparents had TVs or phones, reliable electricity, or, in one case, running water – was sometimes a little like visiting an alternate dimension, a parallel universe, a galaxy far far away.

Usually in the evenings, when everyone sat on the veranda with tea and snacks, or at night under the whirring fan and the gently swaying mosquito net, my cousins and I would gather and a grandmother would tell us stories from Thakurmar Jhuli, or Grandmother’s Satchel, which is a collection of folktales about brave princes and princesses who ride around on flying horses with their bows and arrows, of cruel serpent kings who hoard a wealth of jewels in their underwater kingdoms, of flesh eating, long-taloned, pointy-horned, sharp teethed, rhyming rakkhosh who are the monsters everyone loves to hate.

Some of my favorite stories were those of the half brother princes Lalkamal and Neelkamal who fly about on their winged pakkhiraj horses battling Neel’s rakkhoshi mother, who wants nothing more than to gobble up the fully human Lalkamal. Another of my favorites was about the heroine Kiranmala – whose name means garland of moonbeams – whose two over-confident and slightly dumb big brothers go off on an adventure and end up needing to be rescued by their younger sister. I loved these stories so much would end up translating – with my mom — many into a 1995 collection meant for adults interested in global folktales, The Demon Slayers and Other Stories: Bengali Folktales.

But it wasn’t until many years after that, when I was a mom myself and my son at about 8 or 9 years became a huge Harry Potter and Percy Jackson fan, that I realized that the same problems of representation I’d faced as a kid were still around. Yes, there were more stories about brown kids, immigrant kids, and marginalized kids – but they were usually serious, realistic books, not fun romps or magical fantasies. And my son only liked books with dashing heroes with hilarious sidekicks who saved the world while cracking jokes and kicking butt. And there wasn’t, at least a few years ago, that many kids that looked like him or his younger sister doing those sorts of things in fantasy books.

And that’s when I had an idea. What if I was to write a story for my fantasy-loving son and his younger sister in which a brown kid – a brown girl – was going around being dashing, and having sidekicks, cracking jokes and kicking butt? What if, like the Percy Jackson books, this story was loosely based on the folktales I loved as a kid? What if, instead of going to a real place called India, my heroine’s journey led her into a fantasy land – the Kingdom Beyond Seven Oceans and Thirteen Rivers – where a lot of these folktales take place? And that’s very simply how this book was born, as a story in which my own kids could see themselves being brave, dashing, smart, funny, strong and true.

And if the fantasy and fun was for my kids, the space nerdiness – the wormholes, the black holes, the dark matter, the string theory in this book – that’s totally for me in honor of my childhood love of Madeline L’Engle. And so, I’m so excited that this book is coming out the same year as Ava DuVernay’s multiculturally cast A Wrinkle in Time, it’s like full circle and a dream come true.

I still can’t believe I got not only to write the stories I wanted to read as a little girl, but to share them with readers. I hope you enjoy, and think about writing the stories you want to read too.